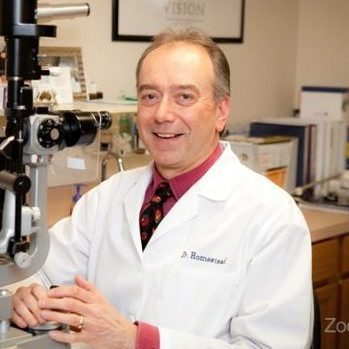 Dr. Homestead is an optometric physician who has been practicing for 40 years. He graduated from Pacific University College of Optometry in 1980. He served two years in the Indian Health Service in San Carlos, Arizona where he was district optometrist for the Apache tribe. He has practiced optometry in Seattle Washington, his hometown, since 1982. He and his wife Beverly decided to make the move to Eastern Washington, the Tri-Cities specifically because they love the culture, the weather and the people in the area.

Dr. Homestead believes vision is a precious gift from God, and he feels it is a privilege to care of such a priceless ability. Dr. Homestead is very much looking forward to meeting you, so you are invited to make an appointment for a routine or medical visit. He believes it is his joy to provide eye care for you and your family, while forming a lasting warm relationship. And by the way, Alan will listen to anyone with a good joke, if they are also willing to put up with one from him.